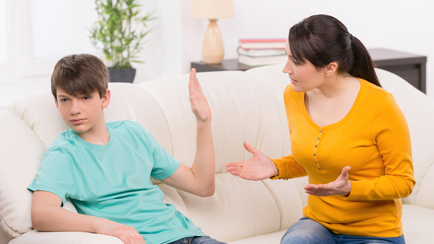 Positive and negative reinforcement is incredibly hard to explain! Almost every time I’ve had professors, supervisors, and peers try to define it, it inevitably turns into a group discussion of each person trying to contribute a better way of explaining it comprehensibly. I’ve even watched therapists teach it 100% wrong during parenting classes.

Understanding this accurately is very important.

1) Positive reinforcement is giving something that increases a particular behavior.

2) Negative reinforcement is taking away something that increases a particular behavior.

3) Punishment is something that decreases a particular behavior.

This part is the most important and where everyone gets confused. Do NOT consider what you are administering when defining it positive/negative reinforcement or punishment. It is only defined by the RESULT it has on the behavior.

Let’s have some examples.

The dad’s action of allowing her to go to the concert would normally be automatically labeled positive reinforcement. You can’t do that. You have to look at the result it has.

It is important to understand that the result your actions have on another’s behavior is the only part that matters. Not whether you think you’re using rewards or punishments. Yelling isn’t helping mom get what she wants. She needs to try something else. I’d suggest a discussion with Todd about what type of reward would convince him to make it home by curfew. Maybe he earns the car for a day (+R), or he earns his way out of doing dishes for the night (-R). Keep trying things to find something that gets you the result you want. Don’t keep doing the same thing that isn’t working just because it sounds good. Don’t keep yelling because you feel like you should or because that’s what your parents did.

There are countless examples I could give, but hopefully this is enough to get you thinking.

Overall, the important conclusion is to ask yourself if your actions are getting you the result you want. Are they increasing or decreasing the negative behavior? If not, change and try something else. Don’t stick to doing something “bad” and calling it a punishment or giving something “good” and calling it a reward. You don’t get to choose what effect it has on the other person. Keep trying different stuff until you find something effective.  If you’re at a loss for ideas or unaware of how you’re encouraging or discouraging the behaviors of others around you, work with a therapist to learn more about yourself and gain greater self-awareness.